This structural analysis was conducted by Ingeniería Geológica Universidad Nacional de Colombia in Medellín, with the assistance of the Max field team. The on-going structural case study of the whole CESAR project is part of a geological master of science thesis study on the Structural Interpretation of the Stratabound Copper-Silver Mineralization within the Rancheria-Cesar Basin, NE Colombia.

The initial structural interpretation of the Herradura Zone concludes Kupferschiefer type stratabound copper-silver mineralization at Herradura forms a continuous mineralized zone, striking approximately 265 degrees. The copper-silver mineralization dips gently to the NNW at 15 to 21 degrees, crops out up dip and is exposed down dip in erosional “windows” along several creeks.

The structural interpretation indicates the low angle copper-silver mineralized zone at Herradura is open along strike and down dip as displayed in Figure 2 and 3. Figure 4 documents the Herradura Zone in an exposed erosional window along a creek. The Company previously reported values of 24.8% copper + 230 g/t silver from a continuous 4-metre by 1-metre rock chip channel and 10.4% copper + 88 g/t silver from a continuous 1-metre rock chip channel in the Herradura Zone (March 4, 2020). In addition, two subsequent bulk samples extracted 1.8-km apart within the Zone, returned 10.4% copper +88g/t silver and 3.5 % copper +29 g/t silver (May 21, 2020).

The field team will focus on expanding AM North’s “Herradura Zone” through rock channel sampling of mineralized horizons exposed in creeks and on hillsides, continually moving out in all directions from the centre of the stratabound copper-silver zone.

Concurrently, the field team will also focus on locating new stratabound copper-silver horizons over the whole of the CESAR project area.

“We look forward to releasing additional exploration results from the recently completed programs at AM North and AM South, as ALS Mineral Assay Labs works to clear the backlog resulting from COVID-19, “he continued. 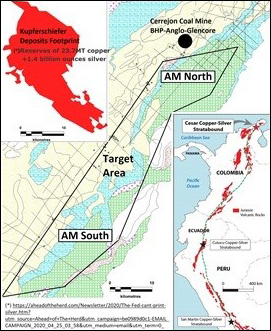 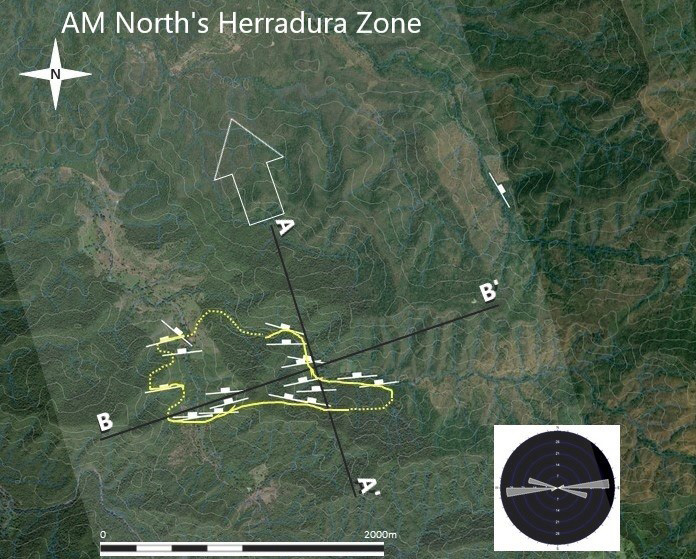 Figure 2. Plan view of surface trace of the stratabound Cu-Ag horizon at the 'Herradura Zone'

Figure 3. Cross Sections A to A’ and B to B’ showing continuation of low angle mineralization 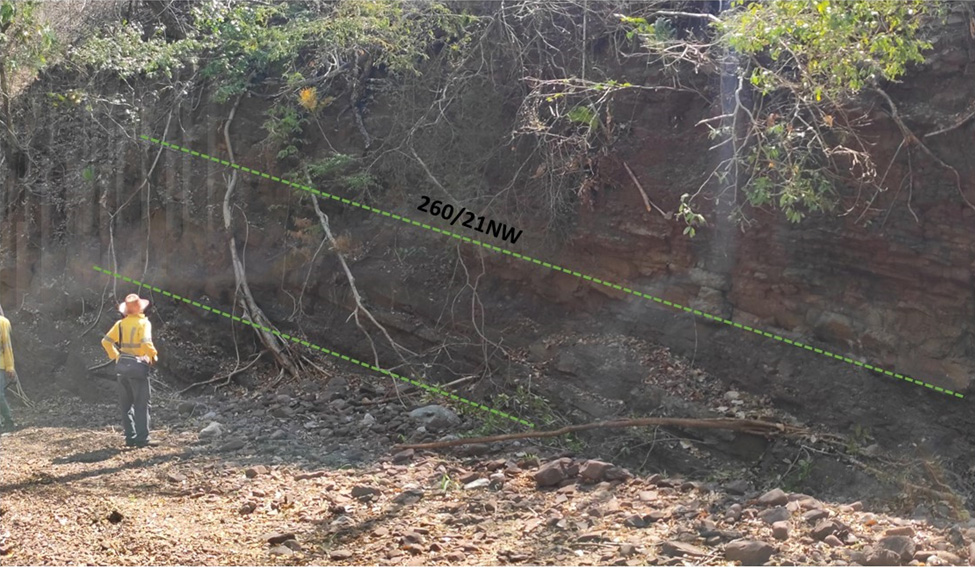 The wholly-owned CESAR in north east Colombia lies within Jurassic sediments and volcaniclastics that extend the length of northern South America. These Jurassic rocks also host significant stratabound copper-silver mineralization in both Ecuador and Peru that resemble sediment hosted copper-silver mineralization of Kupferschiefer in Poland. CESAR lies along a historic 120-km copper-silver belt within a major oil-gas and coal mining district. The region has excellent infrastructure, shipping ports, airports, townships, railways and roadways.

Important highlights for the CESAR Project:

The exploration strategy is to unlock the potential of the CESAR district as a significant copper and silver region.

The EBAY palladium-platinum project, located 30-km SE of Matagami in the Abitibi Region of Quebec, Canada, is underlain by the Archean Bell River Complex, a layered mafic intrusion measuring 65-km by 15-km and 5-km thick. Max has entered into an Option Agreement pursuant to which the Company may acquire a 100% interest of EBAY (May 12, 2020).

CHOCO gold-platinum Project (250 sq.km) is located 120-km SW of Medellin Colombia, within a district with historical production of 1.0Mozs of platinum and 1.5Mozs of gold (1906-1990) by Choco Pacific Mining. Compilation of historical records revealed the potential for related PGE’s particularly palladium and rhodium. In addition, recent field work in 2019 by Max resulted in concentrate values of 114 g/t platinum and 341 g/t gold (April 16, 2019).  Source: R.J. Fletcher and Associates (2011) Review of Gold and Platinum Exploration and Production in Choco Province Colombia Part 3. Private Report for Condo to Platinum NL.

With its successful exploration and management team, Max Resource Corp. is advancing both its copper and precious metals landholdings in Colombia, and its EBAY palladium-platinum landholdings in Quebec, Canada. Each of these belts has potential for the discovery of large-scale mineral deposits attractive to major partners.